Have you been in lockdown too long?  Do you crave excitement, variety, even a little fun?  Then shake things up and get yourself some red fizz!

Sounds like it’s me who’s been in quarantine too long…..red wine is something you sink into, not party with, surely?  Why would anyone sane want it to fizz?

But somehow, red sparkling wine has been popping up on the wine radar with greater frequency of late, ever harder to ignore.  One of three blind wines in my WSET Diploma sparkling wine tasting exam was red, Ingrid Bates at Dunleavy vineyard in Wrington, North Somerset (my nearest vineyard) now makes a sparkling red wine, and my employer Harvey Nichols sells three sparkling reds.

Harvey Nichols likes to stand out from the crowd, but not for the sake of it.  These wines must have earned their place on the shelves.  So the time has come to forget the cheap and nasty Lambrusco of my student days, open my mind, and stock up the fridge with something new – and quite possibly, well weird.

On a blustery July morning I interrogated Ingrid at her vineyard – distracted throughout by her adorable whippet puppy, named Fly.  Why on earth did she make red fizz?? The idea was first mooted by Vinoteca in London, one of Ingrid’s loyal customers.  Up for a new challenge, when a partner vineyard had a bountiful supply of Rondo grapes, Ingrid decided to go for it.  Steve Brooksbank, Ingrid’s winemaker, was rather less keen, but after careful thought he felt it could work; so Somerset’s first sparkling red wine was born.

As with most if not all of England’s quality sparkling wine, this wine was made by the traditional method,  similar to that used to make Champagne.  Unlike still red wines, the grape juice spends little time in contact with the grape skins.  So why is it so red when grape juice is normally pale?  Because Rondo grape juice is unusual in being naturally dark in colour.  The juice is fermented to make a wine which goes into a thick bottle with more yeast, sugar and nutrients.  The bottle is sealed and then the magic, or second fermentation, happens.  Carbon dioxide gas and a little more alcohol is created.  The CO2 is trapped in the wine and escapes as bubbles when the bottle is opened.

Ingrid works with Furleigh Estate near Bridport in Dorset, who have facilities to riddle and disgorge the finished wine.  This is done because when the second fermentation has finished, there are spent yeast cells in the wine which, if left inside, would make one’s fizz rather murky.   So the wine is “riddled” to collect the gunk in the bottle neck, and then “disgorged” to pop the gunk out.

The fizz is then topped up with “dosage” to replace the volume lost when the gunk pops out.  “Dosage” is more wine, very often with sugar syrup added because the high acidity level in sparkling wines can otherwise make them seem too dry for most people’s enjoyment.

Ingrid blind tasted wine made with no sugar added as against the more conventional sweetened dosage, and preferred the drier style.

All Champagne and sparkling wines within the EU must by law have a term indicating the sweetness level of the wine on the label.  Ingrid has used the permitted term Brut Nature, which means the residual sugar level must be less than 3 grams per litre with no sugar added after the second fermentation.  So relatively good for those of us in post lockdown dieting mode.

On the topic of labelling, I asked Ingrid why there is a beetle on the label.  The beetle is in fact a dung beetle.  Not only did Ingrid study these fascinating creatures at university, she also values them hugely in her vineyard ecosystem.

Ingrid wanted to minimise intervention in the winery, so sulphur was not added, and the wine is unfiltered.  Care is therefore needed on opening because there are harmless tartrate crystals inside.  This means the fizz is unpredictable, which all adds to the fun.

I tasted the Dunleavy Sparkling Red Wine Brut Nature 2017 12% abv in July 2020.  I chilled it for an hour as Ingrid advised.  There were tartrate crystals on the cork, and very lively fizz!  In the glass, the wine was a pretty pale ruby colour with a generous mousse.  The nose was a glorious explosion of fresh and stewed black and red currants, rhubarb, rose hips and bready notes from the lees ageing – think blackcurrant jam on a lightly toasted muffin. On tasting, there were extra velvety perfumed notes of violets and hints of cigar box very reminiscent of wines made with Cabernet Franc.  Forget the sweetness of cheap Lambrusco – this wine is dry with refreshing acidity.  Tannins are low but there is plenty of black and red fruit tang to provide perfect balance.

Matthew Jukes, a much more experienced and renowned wine writer than yours truly, enjoyed this wine, and here is a link to his review: https://www.vineyardmagazine.co.uk/food-for-thought/ He found it earthy, which I did not – apparently it was in its youth, but this trait has since receded.  I smugly note that he compares it to a young Bourgueil, which is made from Cabernet Franc.  I promise I didn’t read that until after I tasted it! 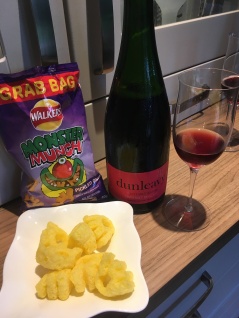 When asked for a food pairing suggestion, Ingrid confessed that she most often enjoys it with pickled onion monster munch crisps (do Vinoteca sell those??).  If making English wine, let alone sparkling red English wine in our notoriously fickle climate was not proof enough that Ingrid is well and truly on the insanity spectrum, this food pairing certainly is.  Such an elegant wine would surely be no match for such an assault on the taste buds.  Totally bonkers.  But – it had to be done.  To my surprise, it wasn’t too bad – the combination resulted in a red onion marmalade finish which had its charms – but this is such a cracking wine on its own.  Perfect for Boxing Day with cold cuts as a bright and breezy antidote to festive overload.

I tasted Dunleavy Sparkling Red alongside the lighter of the three Harvey Nichols wines, the Roberto Balugnani Lambrusco Grasparossa di Castelvetro “Ribello” NV (non vintage) Frizzante (Italian term for wines which are not fully sparkling i.e. less fizzy) 11% abv.  In the glass, it was a darker ruby colour with a persistent mousse which formed a froth around the rim.  The aromas were more delicate, ranging from loganberry to sour cherry and cooked blueberry.  They needed teasing out so I might have overchilled it.  The palate was dry (again, forget sweet Lambrusco!) and slightly sour but this balanced perfectly with mouthwatering fruitiness – cranberries, pomegranate juice, tayberries, fresh ripe blackberries, sour cherries and bready notes which brought a top quality summer fruit pudding to mind.  Pickled onion monster munch was a predictable pairing disaster, but the wine was equally predictably fabulous with pork and sage meatballs, spaghetti and tomato sauce.

Most Lambrusco is made in bulk and stripped of its varietal character.  It is labelled IGT Emilia because it doesn’t comply with the more stringent DOC rules for better quality wine. The five Lambrusco DOCs were created to reflect quality wines of artisan producers expressing the varied characteristics of the different Lambrusco grape varieties and the regions they come from.   They have successfully preserved the drier quality styles to such an extent that even larger producers now make quality dry wines within the DOC regime.   Lambrusco Grasparossa di Castelvetro DOC is regarded by some as being the highest quality DOC.   Expect serious dry wines relatively high in colour, extract and tannin, made using the traditional, not the tank method.

All in all, a fun evening’s tasting which encouraged me to explore more full on styles. 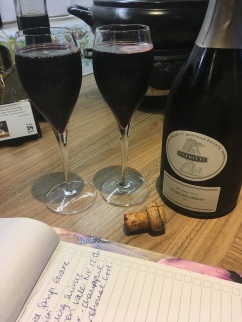 So time to try an Aussie Sparkling Shiraz in the form of Blewitt Springs Estate Sparkling Shiraz NV from McLaren Vale made by Patritti Wines.  Giovanni Patritti, aged 25, left Genoa seeking a better life with his sister in America.  But instead his boat docked in Port Adelaide, South Australia!  Deep garnet in colour, the aromas came to my nose some distance from the glass, propelled by popping bubbles.  Cassis, toffee, tar, leather, clove, cinnamon, star anise and liquorice with a generous splash of kirsch were all there in abundance.  Tasting didn’t disappoint; dry and rich with warming alcohol (13.5% abv), balanced by a fine smooth mousse, acidity freshness and structure from ripe tannins.   The finish was long and evolving, with bramble jelly, cedarwood and a hint of eucalyptus adding extra punch to this meaty megawine.  Unlike the lighter styles, this had most definitely been aged in oak – not an alien concept in sparkling winemaking; the rich Bollinger style comes partly from oak ageing. 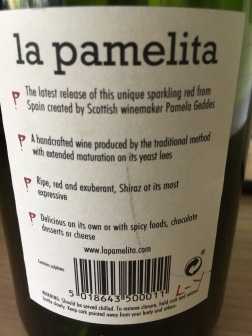 If the Aussie style sounds too much to handle, there are other red sparklers on offer, such as La Pamelita, (photo shows back label) a gutsy glass of ruby red exuberant Spanish fizz with cooked raspberry and blackberry fruit, fig, clove and cinnamon spice, thyme and leathery notes.  This wine hails from Catalunya, where much of the world’s quality Cava comes from.  It is made by Pamela Geddes, a Scotswoman who after years in the whisky industry moved to Australia and was beguiled by Australian sparkling Shiraz.  She moved to Spain and began by making a sparkling red with Monastrell in the very warm Yecla region.  But an opportunity then arose to make red fizz in the cooler Cava region, and this is it.  95% Syrah (aka Shiraz) and 5% Garnacha (aka Grenache Noir), this is dry, with medium tannins and a fine creamy mousse.  Sparkling reds can lack complexity, but this one certainly doesn’t.  The leathery notes, spiciness and the cooked red and black fruits made me think of Rioja.  So well weird, but excellent.

Such robust red fizz challenges conventions.  Why make this stuff?  When do you drink it?  It’s not an obvious match for canapés, and surely it’s just plain peculiar with dinner.  But if you think about it, it’s obvious.  Blitz yourself a beef, thyme and red wine burger and pour while tending the barbecue.  With enough structure and flavour to complement griddled meat, or roasted vegetables, it’s chillable, so perfect refreshment on a hot summer afternoon.  It’s also a great talking point – a quarantine wine find for an outdoor social like no other.

So don’t be scared of red sparkling wines – live a little and find some fizzy red fun!

Sparkling reds are relatively affordable, despite the quality bottlings being made in the same way as champagne.

Roberto Balugnani Lambrusco is available from Harvey Nichols for £15.50: https://www.harveynichols.com/brand/roberto-balugani/2328404-lambrusco-nv/p2877766/

Blewitt Springs Estate Sparkling Shiraz NV was available from Harvey Nichols online but maybe I had the last bottle – it has now vanished!  So try Catchpole Cellars who have it for £24.50: https://www.catchpolecellars.co.uk/wine/view/australia/blewitt_springs_estate_sparkling_shiraz/PBSSPSH

For more sparkling red recommendations, here is a link to a fairly recent piece in The Independent: ttps://www.independent.co.uk/extras/indybest/food-drink/champagne-prosecco-sparkling-wine/best-sparkling-red-wine-under-20-australia-sweet-lambrusco-good-cheap-a8210261.html  Harvey Nichols have the Bird in Hand Pinot Noir but I think it is rosé not red?

To read more, Wine Folly has a neat summary of the main sparkling red styles, including Lambrusco in its many forms – highly recommended reading: https://winefolly.com/deep-dive/sparkling-red-wine/

PS Sorry this is long, but felt these crazy wines needed a little more explanation.