I am not like Sarah Jessica Parker.  No, really, I’m not.  We both like a glass of vino but who, with any wine cred, would announce a new wine range with a sentence making it clear she has yet to visit the vineyards where the grapes are grown.  Even if they are in New Zealand.  Come on SJP – hop in your jet and get those generously donated wellies on…..

I, on the other hand, have been out and about in the (sometimes) sunbaked slopes of Sutton Ridge in Somerset with my very muddy Hunters on to find out more about Luke Ford’s increasingly renowned wines in a bid to see if I can get my head around that most hardcore of all vineyard activities – winter pruning.

I chose my vineyard well – it is Luke’s policy to prune late so pruning here is a fairer weather job than in most vineyards. My visit was on 1 March 2019, by which time most English vineyards aim to have finished this task – and a sneaky peek into Aldwick Estate on my way there confirmed that pruning there was already done and dusted.

Sutton Ridge Vineyard lies on a sunny slope overlooking Blagdon Lake which is steep enough that  I was slightly breathy on reaching the top.  Its manageable size enables Luke to prune late as he can get the job done fairly quickly (he says early morning sessions every day for 4 weeks gets it done!!).  The idea of late pruning is to minimise the risk of losing his precious crop to frost.  But prune too late and he risks rubbing off the delicate leaf buds  – if they get “woolly” they are more vulnerable.

Before my visit, I flicked back through Stephen Skelton’s Viticulture tome and predicted that I would be cane pruning, not spur pruning, the former being the more usual choice in cooler climate vineyards with vigorous growth – like Luke’s vineyard, which lies on fertile land with rich clay soil over mudstone.

Cane pruning, also called cane replacement, creates a relatively thin “leaf-wall” better enabling pesticides and fungicides to reach the canopy interior, and also creating maximum exposure for buds, shoots and fruit – necessary in climates like ours where sunshine is in relatively short supply.   There was some spur pruning where a long arm had been grown along and down to replace a lost vine (see photo of Luke further down), and Luke kindly got me spur pruning to see the difference.  Even I could manage spur pruning – just count three buds and snip.  Whereas cane pruning involved me staring in puzzlement at the options for this year’s fruiting canes.  This “before pruning” photo shows how many there are, and the options vary from vine to vine.  Cane pruning therefore necessitates skill and time, and is expensive because it is hard to mechanise.  It also takes longer to remove all the redundant wood, and this also adds to the expense.

Cane pruned vines are known as single or double Guyot after Dr Jules Guyot who first recorded this system of pruning, and Luke’s vines are generally double Guyot – so after pruning, we aimed to have one “arm” or cane reaching along a fruiting wire in each direction, with a few “thumbs” beneath as the starting point for next year’s canes.  The “one armed bandits”, or single Guyot, were seen only on weaker vines.  I was not convinced that the canes could be bent as required without them snapping, but Luke assured me that they are sufficiently pliable, especially after rain.  In this “after” photo, the canes haven’t yet been tied down.

Luke had already pruned the dark berried Regent vines, so he let me loose on his precious Pinot Noir, used for his fresh and elegant Dewdown traditional method sparkling wine, and also sometimes as an addition to his moreish rosé.

I learnt that pruning is a process of elimination.  The old fruiting “arms” and new wood at the extremities is cut out, leaving the options for this year’s fruiting canes more easily visible.  The choice depends on the shape and condition of the vine.  Factors affecting the choice of cane include the need to get rid of any wounds, such as from canes which snapped off, which increase the disease risk, the aim of keeping the “head” at the top of the trunk of the vine beneath the fruiting wires, and the need to keep the origin of this year’s canes as near as possible to the “head”.  Ideally, “thumbs” with three buds on are cut accordingly beneath the canes.

But sometimes the “thumbs” end up above the canes if the better canes are lower down, some seemingly ideal canes are naughtily growing in the wrong direction, or are simply too short to be of use – and so it goes on – so having removed the less ideal canes, you are hopefully left with at least two suitable canes.  The photo above shows what you are meant to end up with.

To minimise the risk of trunk diseases, we dipped our secateurs in alcohol between pruning each and every vine.  This isn’t feasible in large vineyards, but Luke’s crop is small and precious so it is worth this momentary pause to keep his vines healthy.

While I dithered about where to begin and which canes were best Luke, by contrast, was chopping away with ruthless decisiveness.  Needless to say, after patiently explaining everything and then allowing me to talk through the decisions, if we were to get a respectable amount done before dark, we needed to adopt an approach which involved Luke chopping and me tidying. 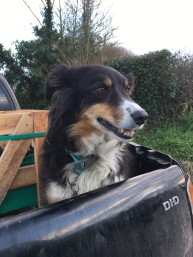 Ably assisting the process was Luke’s father Ian (a farmer) who efficiently collected the heaps of pruned wood and trimmed off the tops of the vines making the pruning easier.  Flo, Luke’s devoted collie, was delectable but less helpful – I was swiftly identified as a constant source of fuss which slowed down my pruning selections even further.  Flo is highly intelligent – she “retired” at 18 months of age having worked out that a dislike of sheep would give her an easier life.  She is now my favourite vineyard dog – along with bacon loving Dennis of Aldwick Estate, of course.

Since I was an unlikely candidate for Luke and Ian’s dawn sorties to the vineyard to complete the pruning in a respectable timeframe, I opted instead to return after budbreak to see how my Pinot Noir protegées and their companions are fairing.  The plan is to return after that at flowering, fruit set and veraison (when the grapes change colour) and then finally at harvest.  A blog will update you after each visit. Fingers crossed Jack Frost doesn’t visit the vineyard in the meantime…..

One thought on “A Year At Sutton Ridge Vineyard: Visit 1 – Winter Pruning”