It was Whisky Night again at The Wine Shop in Winscombe last Friday, and after a couple of weeks’ duty as an exam invigilator I can tell you this tasting was just what I  needed to reinvigorate my senses.

Marlowe Harris, the whisky buyer for Amathus Drinks whisked us around the world to try twists on old favourites, ground breaking innovations and a couple of whisky based cocktails.

We kicked things off with Whiskey Thief, in which bourbon is reinvented using convection oven technology to bring out additional flavours from the oak barrels used for ageing, which are reflected in the whiskey – in this case mocha oak flavours.  Created by the owner of the Lexington bar in London, I felt it was lacking in balance on its own.  I enjoyed its notes of corn, caramel, prunes and nuts, but it was very hot, and had a bitter tinge.  However – it was a revelation in the Whiskey Ginger (i.e. with ginger ale and an orange slice).  There was a smouldering smokey embers finish which didn’t seem evident at all served neat.  Marlowe explained that very often the smokiness from the charring of the barrels, key to the bourbon style, comes to the fore in a cocktail.  Whiskey Thief is a sublime mixer and a snip at £25.99.

Next was Koval Organic Single Barrel Rye Whiskey from Chicago.  They set out to make a grain dominant whiskey, moving away from the oak dominant style of bourbon.  This was smooth, balanced and complex with a nose of straw, clove, cinnamon, rye, raisins, burnt orange and peanut brittle.  On the palate I also noted honeysuckle and coffee and a creamy mouthfeel.  Very good – £46.99 is a fair price for it. 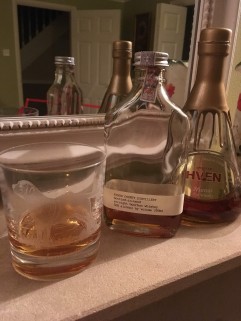 Kings County Distillery’s Straight Bottled in Bond Bourbon (see photo) from New York City came about when a chap from a dry part of Kentucky began ageing his moonshine.  To be Bottled in Bond the whiskey has to be 50% abv, at least 4 years old and distilled in one season only, i.e. not blended.  It has gongs aplenty.  It is pale mahogany in colour and exudes powerful intense aromas of prunes, marzipan and brazil nuts with some floral hints.  Others would say cherries and chocolate.  I felt it needed a little water – but I added too much which rendered it soapy – oops!  It’s £33.99 for 200ml reflecting its individuality and intensity.

Spirit of Hven Hvenus Rye Whisky (see photo) is from a Swedish island where they grow the grain used for their whiskies.  It is the brainchild of a leading chemical analyst of spirits who set out to isolate why Swedish rye whiskies taste so distinctive.  This orange tinged tipple had a little sediment in it and was bracingly herbal in its flavour profile.  I smelt cherries, benedictine, menthol and mint – my nasal passages were well and truly decongested.  On tasting, it seemed like a dry Drambuie – in a good way.  Its 45.6% abv was balanced with its powerful flavours and silky texture, and with water it acquired chocolately creaminess.  A mouthful I could sink into – £48.99 for 500ml reflects its provenance and quality, and it comes in a funky conical shaped bottle.

The English Double Cask Bourbon & Oloroso is a limited batch release from the English Whisky Company in Norfolk.  2,943 bottles were made with a minimum age of 7 years.  The tiny output from this distillery can be put into context – Glenfiddich produces in 2 hours what they produce in one year!  They managed to procure input from Ian Henderson Master Distiller, formerly of Laphroaig and Ardbeg, when he retired.  Their aim is to make whisky according to Scotch rules, but in England.  The nose had what I would expect to find in Scotch – straw, burnt lemon, bread, and a wee hint of damp dog.  However, it’s the palate that really sets this dram apart.  There is a massive surge of flavour, and a long, evolving finish which includes such disparate flavours as strawberries, nuts, straw, smoke and herbs – but you could sip it over and again and find even more going on.  My classy glass of the night.  £52 for 700ml – not bad for a dram of this class.

We finished with a fancy Overaged Malt Whisky from Michel Couvreur of France, a wine trader making this unctuous extravagance using Pedro Ximenez and Oloroso sherry barrels which still contained sherry.  Blended to achieve optimal balance, and gravity filtered to retain flavour, this was very promising on the nose with inviting toffee apple, tarte tatin, brazil nut and caramel aromas.  The rich and weighty palate had bite and smokey notes.  With water the sweeter tones of the nose were more prominent, so how much if any to add depends on how you prefer it.  This was a big hit with several of us, but they will need deep pockets since the price is as fancy as the dram at £81.99.

The martini glasses were out for a Manhattan to round off the night in style, made using Whiskey Thief, Berto Vermouth and Bitter Union Aromatic Bitters.

This tasting proved that these days, there is so much more to whisky than just Scotch.  Bold new flavours, textures and adjustments to balance are being created for every conceivable whisky savouring experience.  With the advent of new technologies, there is without doubt much more to come.