On 29th October 2019 I returned to Luke’s vineyard to harvest Pinot Noir grapes from the vines I had pruned back on 1st March, 8 months ago.  On both days it was rather chilly!

The Fords are one of Somerset’s farming families, so harvest time is very much a family affair.  To fit in with the family theme, and it being half term week, my daughter Eva and our lovely but wayward black labrador Arthur came along too.

It was lovely to catch up with Luke after the Somerset Wine Fair on 25th October 2019, which proved very successful with a record number of bottles ordered.

Luke waited until the last moment to harvest the Pinot Noir.  This autumn was damp and cool so ripening was slow.  It was worth the wait.  Pinot Noir can ripen too quickly becoming rather “overcooked” in flavour without the complexity for which it is prized.  But this year the wine should be very complex because ripening was so gradual.  Acid levels dropped sufficiently, while sugar levels rose gently.  As the weather was about to turn wet again, Luke decided that there was no benefit to waiting any longer, so we were summoned to the vineyard on what proved to be the last dry day for some time.  Pinot Noir bunches are tightly packed like pine cones, hence its name, with thin skins – perfect for mould to set in – so it was best not to leave it any longer. 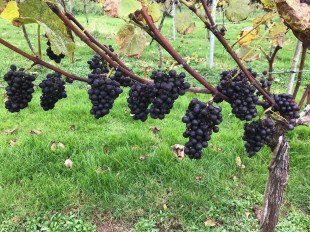 Despite the weather, the grapes were remarkably rot free, which no doubt reflects what is a good site on a sunny slope.  Luke says the quality of the Pinot Noir grapes this year was “fantastic”  (must be the expert pruning…..!?).  Luke advised us that the grapes would be de-stemmed at the winery, so we simply needed to snip the bunches without trimming too much off.  But as there are no luxuries such as optical sorting tables in this vineyard, we did need to be vigilant and snip off any mouldy and/or unripe grapes.  Luckily there was little of either, since I rather doubt Eva would have had patience for too much snipping.  I also had to contend with Arthur taking himself off to every corner of the vineyard sniffing out pheasants.

Luke’s young nephew, also called Arthur, was also helping.  He was a little puzzled by me shouting his name repeatedly as if he had misbehaved.

This was my first time harvesting with Eva, who appeared to be quite content, and who to my astonishment didn’t cut herself with the secateurs. 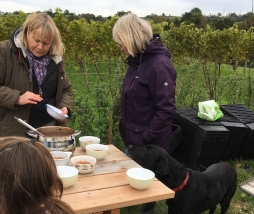 Harvesting is done rapidly at Sutton Ridge.  All of us knew we needed to crack on in order to get our hearty lunch, served with a refreshing drop of rosé. As you can see, Arthur particularly appreciated the lunch offerings.

So my lovely Pinot Noir is safely gathered in, and the vines can now have a well earned rest over the winter until Luke and his father return in late winter to prune.

So where did the grapes go?  To Steve Brooksbank’s winery in Shepton Mallet, where a substantial proportion of Somerset’s wine is made.  Luke isn’t yet planning a still red wine from his Pinot Noir, and even if he was, 2019 was not a year to attempt it.  So these beauties, along with the Seyval Blanc, will be making Luke’s elegant Dewdown sparkling white wine.  Pinot Noir is one of the grapes used to make not only champagne, but also other quality sparkling wines around the world – for which reason it is currently the Number 1 black skinned grape variety grown in the UK, which has a thriving sparkling wine industry.

It will be some while before I get to taste the wine made from these grapes, because the wine is made using the traditional bottle fermentation method which is the same as that used in champagne.  First a low alcohol high acidity still white wine is made.  This goes into a thick bottle with  more sugar and yeast, and the bottle is sealed.  A second fermentation happens in the bottle, creating a little more alcohol (about 1.5%), and carbon dioxide gas which is trapped and dissolved into the wine, being released as bubbles when the wine is opened.  The wine then rests on the lees (yeast cells which died after scoffing all the sugar!).  This gives the wine more complexity with delicate biscuit and bread dough aromas and flavours.  As we don’t want grotty dead yeast cells in our fizz, the wine has to be “riddled”, which gradually moves the lees to the neck of the bottle.  This is then frozen, and when the bottle cap is removed, a plug of lees pops out.  After topping up with more wine, the bottle is re-sealed with a very thick cork cylinder which turns into the familiar “mushroom” shape under pressure in the bottle.  This is called “disgorgement”.  After disgorgement, the wine needs to age further under cork before being released for sale.

So when will I get a sip?  The wine won’t be bottled until July 2020, and it will then be left on its lees for 18-24 months (the minimum period for champagne is 12 months, and for Crémant wines 9 months – but many are left on the lees for far longer).  There will then be further ageing after disgorgement of 4-6 months.  So maybe Christmas 2022??

I’m not sure I can wait until then, but happily the current release of Dewdown is available right now!  This is the 2014 2nd disgorgement which spent 40 months on its lees and 4 months ageing after disgorgement under cork.  It has a lowish abv of 11%, perfect for spring and summer weddings and picnics, and for those who don’t want a high alcohol wine.  The mouthfeel of the wine is soft and rounded, with fresh stone fruit and tangy citrus flavours to enjoy with hints of bread and biscuit due to its extended lees ageing.  A beautiful match with white fish (fish & chips even better!) and also light sheep’s milk cheeses like Manchego.  Or New Year’s Eve (I am thinking of one particular friend who could probably do with less abv in her celebratory fizz judging by previous New Year’s Day hangovers!). 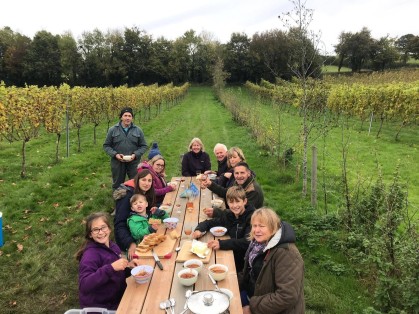 It has been an absolute pleasure to visit Luke and his lovely family at Sutton Ridge throughout 2019.  Although a small vineyard, quality is undoubtedly the watchword here, and this shows in the wines which are big favourites in our household, and which are gaining in recognition – see for example write ups appearing in Decanter magazine.  I had no hesitation in taking a bottle of Luke’s rosé to Armagnac as a gift for my host during my recent tour of the region; I am confident that she will enjoy it every bit as much as we do.