Darroze is family business, begun by Francis Darroze and carried on by his son Marc (whose sister Hélène Darroze is renowned head chef at The Connaught Hotel restaurant in London which has two Michelin stars).  It is essentially a cellar of sought after, hand picked and expertly raised Armagnac treasures.

I was privileged to be welcomed to Darroze by none other than Marc himself for a cellar tour and tasting.  My guide Amanda Garnham and I had an early start, because Darroze, situated in the village of Roquefort (not related to the cheese), is found at the far western edge of the Bas Armagnac region.  Bas Armagnac, with its distinctive tawny sandy soils deposited by ocean tides, is regarded by some as the region producing the highest quality Armagnac.

Darroze do not make their own eau-de-vie.  Instead they have established trusted partnerships with small artisan producers, from whom they buy the eau-de-vie, which they then age in their own cellar.  Their aim is to enable each Armagnac to reach its true potential, and to express its own unique terroir.  Some producers distil their own Armagnac, while others use mobile distillers who tour the region for several months each year.

Finding and obtaining the best Armagnacs is not something anyone can do.  Francis’s father Jean took a humble local café to Michelin star status.  In doing so, he built up an enviable relationship  with the region’s finest food and beverage producers, and he passed on his skills to Francis, who learnt how to identify the very best Armagnacs, as well as how to gain the trust and co-operation of the producers.  He in turn passed on his skills and network to Marc. 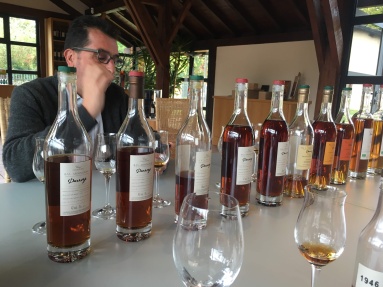 When Marc sat me down in the tasting room with an array of 14 Armagnacs to sample (somewhat daunting mid morning!), it was soon obvious that he knew each one of them intimately, and takes very seriously his role in maintaining the reputation and quality of each one of his producer partners.  Except for Armagnacs much older than the business itself, acquired some time since their creation, where the history of ageing or in some cases the grape varieties used remain shrouded in mystery!  Marc therefore has to trust his knowledge and experience when tasting these mysterious offerings, rejecting anything which tastes as though it was not well made, or well kept.

I began with a pair of organic blends, a minimum of 4 and 7 years old respectively.  The 4 year old, 100% Folle Blanche, had an approachable honeysuckle and fresh plum profile, and an attractive almond finish.  The 7 year old, from Ugni Blanc & Colombard, was more complex, with hazelnuts, prunes, pastries, orange, cinnamon and a long pine smoke and walnut finish.  There must be something older than 7 years in here, it is very impressive for its stated age.

Moving on to the Les Grands Assemblages range, the 12 year old was delicate and elegant with bready pastry, yellow plum, mango and caramel notes, a hint of burnt hazelnut and a long spicy smokey finish.  I loved the 30 year old, with its exotic perfume of nutmeg, cinnamon, candied orange zest, sandalwood and dried pineapple, pecans and tobacco leaf.  Plentiful yet soft tannins with a sweet and sour tang completed an intriguing experience.  Perfectly balanced, this would be a magnificent digestif for a special meal.  These are both available online from Harvey Nichols.  The 60 year old was dark but with floral fruity aromas – honeysuckle, pears, and apricots, incredible given its age.  Tannins were powerful, with bitter walnuts and smoke to savour on the finish.  Quite a character!

There isn’t room to include tasting notes for all of these gems, but here is what the 1929 tasted like: aromas of sawn sandalwood, butter, orange, fig, chocolate and coffee.  Plenty of tannin but in elegant balance with a sequence of flavours – figs, creosote, incense, prune, raisin, and medicinal notes.  The finish was very long.

Though for me the 1936 was perfection, so here’s a note about that too:  A very intense nose of prune, cigar, old leather seats, manure, cedarwood, raisins, coffee and chocolate.  Softening but abundant tannins on the palate, with bitterness perfectly counterbalanced by sweet raisins.

The Gaube 1964 had aged for 55 years in oak.  Armagnac does not usually age that long in oak because alcohol is lost through the wood each year (the “angels’ share”); once the abv drops below 40%, it can’t be called Armagnac, so it is bottled before that happens, usually by 40 years of age.  But this was 42% abv, and for whatever reason (possibly that the oak barrels it aged in were large and old), the angels had not claimed their usual helpings of share.  This being 100% Baco, a grape which has particular longevity, it was interesting to see what it could achieve with longer than usual wood ageing.  Think treacle and rich apricot jam along with prunes and pastries, with rounded tannins in perfect balance, a lively fresh palate and a long tingling exotic incense finish.

Marc explained that Darroze are increasingly using huge oak barrels for ageing, especially useful for Baco which lives long and needs to age slowly to reveal its true potential.  They might use new oak for 3-4 years, then smaller oak barrels for 5 years or so, but then 200 hectolitre vessels for long ageing to slow the angels’ share, and thereby to slow the ageing process to allow greater complexity to develop, with later bottling maximising the potential of the Armagnac to express itself.

Although I was meant to be noting the differences in terroir, which were evident from the disparity and range of flavours in my tasting notes, I also noticed common themes.  One was that Marc seems to have a particular liking for Baco.  The other was that with the exception of the very youngest blends, Darroze Armagnacs seem to lack the fiery attack which can make some Armagnac appear rustic and unrefined.  The Darroze style seems to be approachable, polished and balanced with tannic structure readily softening on the palate, and mellow alcohol.  I therefore asked Marc whether he agreed, and if so, how that had been achieved.

Marc explained that like other producers, they aerate young Armagnac so that it loses its most aggressive alcohol.  But Darroze like to aerate more than most.  There is usually annual aeration for the first 3-4 years, then every 18-20 months until 8 years of age, after which the aeration stops.

I also wondered whether the tasting experience was further enhanced by the glassware, which seemed better suited to Armagnac tasting than most I had used so far on this trip.  Marc said his glasses were from Riedel.  They are more generous in size and wider at the top which I found enabled a better appreciation of the range of aromas.  I find a narrow top for Armagnac tasting a daunting prospect; everything is very powerful making it more difficult to pick out the full range of aromas.  I believe this is a particular issue for female tasters who are believed generally to have more sensitive aroma and flavour receptors than men.  I later discovered that BNIA recently updated their tasting glasses to a very similar style, which will hopefully increase appreciation of Armagnac in their tasting room. 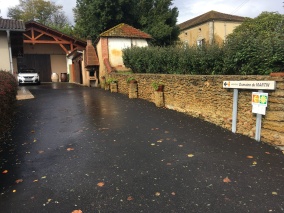 As we chatted, Marc discovered that I had yet to experience a distillation.  This being early November, the distilling season was just beginning, yet despite various visits, no one had been distilling when we were there.  He promptly and very kindly arranged for us to visit Domaine au Martin in Hontanx, a Darroze partner of many years standing, so I could see distillation first hand.   You can see Martin Armagnac barrels from 1997 and 1998 in the photo further up. 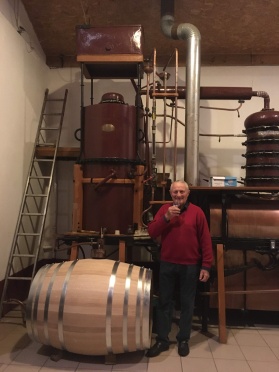 Amanda therefore very kindly made a detour from our tight itinerary and took me into the heart of rural Gascony where (despite my map reading) we found an utterly charming and welcoming senior citizen called Jean-Luc Deyres tending an even more senior gas fired alambic (made by Sier in 1901), in an immaculate distillery which, from the outside, looked like any other farm building.  The room was cosy, despite inclement autumnal weather, due to the heat from the still.  Jean-Luc enthusiastically imparted numerous nuggets of information but my French is terrible, so Amanda translated the important points for me.

The wine being fermented came from Baco grapes, from their 5 hectares of vines, and was coming off the still at 54% abv.  It was tepid, clear, and incredibly fragrant. It takes 8 hours to fill a barrel.  Wine was being pumped from tanks at the opposite end of the room into the still, and in between was a long trestle table at which the Deyres family and friends would gather in the evenings to eat and celebrate the distillation.  The still can’t be left unattended, and runs continuously, so someone has to sleep in the room while the distillation continues.  The white gunge in the photo shows that the alambic plates were sealed with a paste of flour and water, i.e. a natural glue; anything not natural would result in an unacceptable taint of the eau-de-vie.

Jean-Luc then left the still briefly to show us his small but equally immaculate cellar.  He keeps two barrels each year and sells the rest to Darroze.  Traditionally, Armagnac producers would keep some Armagnac in case of a “rainy day”, to fund family weddings, etc.  Jean-Luc continued to chat animatedly with us, and Amanda brought him up to speed on the latest happenings at BNIA, Armagnac’s regulatory body.  There are many small Armagnac producers dotted about in very isolated corners of Gascony, and it is difficult for BNIA to reach out to all of them as regularly as they would like.  So this was a lovely opportunity for Amanda and Jean-Luc to have an impromptu catch up.

Domaine au Martin is very typical of the smaller Armagnac producers who put their land to a variety of uses.  In addition to their vines, Jean-Luc and his son also farm various cereals and, inevitably, ducks.  There appear to be more ducks than people in Gascony.

It was a special honour to meet Jean-Luc.  He is the personification of high quality artisan Armagnac production.  Unassuming, unpretentious, and yet an undisputed master craftsman, quietly creating a hidden gem in the heart of the Gascony countryside.  Those seeking authenticity and craftsmanship in their spirits need look no further.  Many thanks to Marc, Amanda and Jean-Luc for a special and memorable tour.