Each Armagnac house has its own USP, and for Janneau, perhaps its best known is that it is one of only 3 Armagnac producers to use double pot still distillation, the method used in Cognac.  But there is so much more to Maison Janneau than a double copper pot still.

For my visit in early November 2019, Amanda Garnham of BNIA kindly took me first to the Janneau distillery, which can be found in an underwhelming industrial area on the outskirts of Condom.  The distillery itself is housed in a large anonymous cuboid structure which has a bleak air of Cold War communist bloc about it. 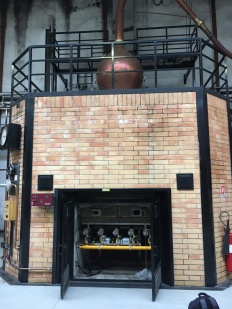 But inside lies a distiller’s paradise.  For a start, there is not just one double copper pot still.  There are three!  The first is huge, so huge it would not all fit in my phone camera viewfinder.  My photo of the two smaller stills was taken by clambering to the top of the big one.  All three stills are heated by gas burners.

I was honoured to be shown these gleaming pristine beauties by none other than Janneau’s cellarmaster of 40 years, Philippe Sourbes, who was utterly charming.  When he is not tending Janneau’s Armagnacs, he spends as much of his spare time as possible mountaineering! 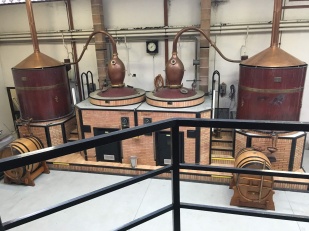 Philippe explained that Janneau do not have their own vineyards.  Instead, they have contracts with estates throughout Bas-Armagnac and Tenarèze.  When the grapes are harvested and their juice has been fermented into wine, Philippe selects which batches he will use.  When distillation starts (the plan was to do this in January and February 2020), the wine is piped from a tank into the top of the furnace of Alembic No 1, which is the large still.  It descends for its first distillation by gravity, the resulting brouillis emerging at 30% abv.  The brouillis is then split in half to go into the two smaller stills.  The first 50 litres coming off are the heads which are put back into the wine to be re-distilled.  The outflow pipe then moves to a barrel and the next 700 litres from the still is the hearts which become the Armagnac.  After the hearts come the tails which are discarded.  The hearts abv is 70-71% abv, much higher than for an Armagnac continuous alembic which, at Janneau, comes off at around 60% abv – in itself rather higher than other houses I visited.which aim for the low 50s.  Janneau eau de vie is therefore lighter in character, and the pot still spirit is lighter than the alembic, with less character, and less need for long ageing. 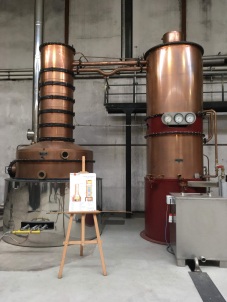 Although Janneau was a family owned and run Armagnac house, it was bought by Martell who, in the 1970s, introduced the copper pot stills used today.  As for why, it’s obvious – double pot stills are used for Cognac, and they are also allowed in Armagnac, and as Cognac producers, that is what Martell knew and understood.

Philippe prefers to use the continuous still to bring out the lighter fruity floral character of Folle Blanche, in particular.  Janneau used to buy in spirit made in a continuous still, but then acquired their own still from local manufacturer SOFAC.  This still uses much less gas than its double distilling neighbours.

Across from the distillery are the cellars.  One houses large blending vats used to achieve consistent house styles.  The other contains approximately 2,400 barrels of Armagnac on which the grape variety and the estate are marked in chalk.  Where possible, they distill and age wines from the various grapes separately.

Aeration is an important cellaring process for Janneau.  It lessens aggressive alcohol in younger Armagnac.  Grape varieties are aerated together in a batch, which is then either put back in barrel for further ageing or transferred to a blending vat.

Janneau have created an aeration channel built into the floor of their cellar, which I fancied would make a handy skittle alley when not otherwise in use.  Aeration is important here because, as above, Janneau’s alcohol levels are relatively high.  Young Armagnac is aerated once a year, and older Armagnac is aerated twice a year.  Janneau Armagnac is generally bottled when it has come down to between 50 and 55% abv.  On the day of my visit,  for example, a 1991 was bottled at 55% abv.  Reduction to bottling strength is then achieved by gradually adding distilled water. 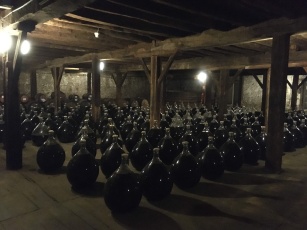 We adjourned to the centre of Condom to the Janneau family house for some tasting.  The family don’t live there any more, sadly, but there remains an ancient and atmospheric cellar hidden deep beneath the house which is home to Janneau’s most ancient stocks, including vintage Armagnac from 1872!

Philippe kindly showed me a range of Armagnacs which were ideal for me as a spirits student to analyse.

I compared a VSOP and an XO, both of which were made using grapes from both Bas-Armagnac and Tenarèze, but the VSOP was 60% double pot still and 40% continuous single still, while for the XO the percentages were reversed. 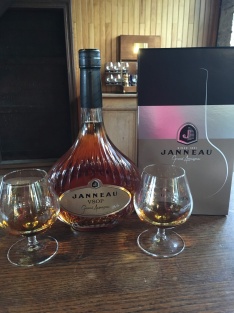 The VSOP had medium level copper mahogany colour tones, a pronounced nose of prunes, spices and apricot jam, and a warming and mellow palate with a prunes and pastry finish.  The XO was a deep coppery mahogany, with very pronounced pastry, plum tarte tatin, sawn wood and hazelnut flavours.  The palate had a pleasing sweetness, and the finish evolved from pastry notes to dried citrus and pecan nuts.

Despite the use of a double pot still, these were both unmistakably Armagnacs, even down to my notes of “prunes and pastry”, albeit that they were also decidedly polished, dark and mellow. 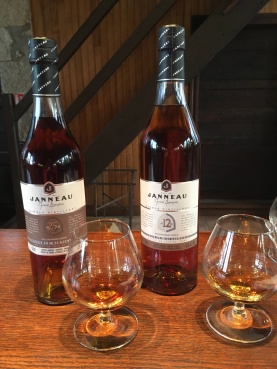 Philippe then offered me a couple of samples from a range of 8, 12, 18 and 25 year old Armagnacs made from Ugni Blanc grapes (the grape variety of Cognac), from the many and varied soils of Tenarèze.  The 12 year old, at 40% abv, had a nose of sawn wood, cherry, plum, nutmeg and mace.  The palate was intense, with sweetness, and the finish was long with marmalade character. The 25 year old, at 43% abv,  had a range of intense flavours, including prunes, pecans, cinnamon, orange, cherry wood and spicy smoke.  The 12 year old in particular would not be a typical Armagnac, but certainly neither of them were like Cognac.  Comparing them with notes I had made about Cognac on my Diploma course, there are similarities of course, as there are when comparing any Cognac with an Armagnac.  But flavours like grapey perfume, stewed and baked apple, honeysuckle and hyacinth would point to a Cognac and I could find nothing of that character in these.  They were instead expressions of the terroir of Tenarèze.  And they were both excellent! 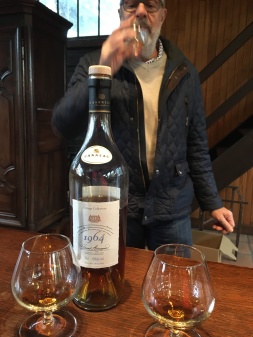 We concluded with a 1964 100% Baco from Bas-Armagnac matured in small barrels.  Mahogany in colour, this had intense smoky, nutty and savoury character.  There was sweetness as well as bitterness, and its long evolving finish ranged from walnuts, to toasted pecans, to mushrooms, to leather, to smoke.  Most definitely Armagnac for grown ups.  For those who enjoy a post prandial cigar, there is no need, it has all the smoke you could desire in the glass.

The words which sprang to mind on tasting this range were mellow, intense, and focused.  Which of these characteristics, if any, are due to the influence of a double pot still, I am far from expert enough to say.  I suspect the mellow character might be due to the aeration necessitated by a higher abv.  What is clear is that Janneau is yet another example of the huge diversity of styles and flavours of Armagnac, a region whose annual production is dwarfed by that of Cognac.  Janneau’s contribution to the quality and variety of Armagnacs available to eager taste explorers is valuable, and should be cherished. 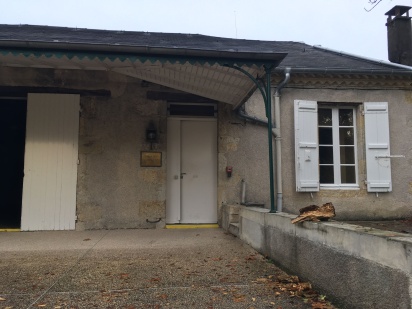 However, I felt great sadness on leaving the Janneau family home, knowing that it was soon to be sold, albeit to Aurian,  a local Armagnac and liqueur producer (more about them here: https://www.aurian.fr/en/

Change is inevitable with the passage of time, as any business of longevity can testify.  But it seemed sad to me that the heritage and tradition of this family founded and respected Armagnac house would be lost.  It felt to me as though Philippe and his team were being let down by this turn of events.  It would be a testament to them and their expertise if their distillery and cellar could be renovated to create a stylish showcase for all that Janneau has to offer lovers of Armagnac, which Janneau and the Armagnac regions can be proud of.  I am hoping that if and when I next visit, a transformation worthy of Janneau’s heritage and its special place in Armagnac’s history will have occurred.  The cynic in me, in this age of profiteering and asset stripping, rather doubts it.  But Philippe and team Janneau will carry on producing their unique and special Armagnac regardless, I hope.